With a real life screaming messy unpredictable baby ... am I nuts to use cloth nappies? "All of a sudden, I kept meeting people talking about cloth diapers, and it felt like too much of a hint not to look into it …"

This post comes from Courtney Baker, long-time running wo-man of an awesome website called Man Versus Debt. On the site, she and husband Adam, who is also a documentary film-maker, share their accounts of their own journeys to remove barriers – primarily debt and excess clutter. They try to empower and inspire others who find themselves on similar paths. In this post, Courtney, relates her experiences with whether to use cloth nappies for her second child. 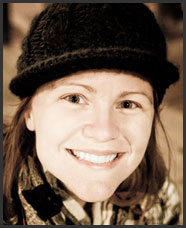 "I had heard about cloth diapers in a “back in the old days” kind of way. I didn’t really understand how cloth diapers worked; and when I had Milli, cloth diapers weren’t even a thought. It wasn’t until I was pregnant with Charlotte, my second daughter, that I realized cloth diapering was making a come back.

All of a sudden, I kept meeting people talking about cloth diapers, and it felt like too much of a hint not to look into it…

With a real life screaming, messy, unpredictable baby … I really had no idea what I was getting into, but I loved the idea of it. As I tried to decide the next step, a million questions came to mind:

It was all a bit overwhelming, but I decided the best way to learn was to get my hands on a handful of diapers and start slapping them on Charlotte to see.    Well… it only took a few weeks for me to be hooked."